I have the world's noisiest o-scope! It's an old ADC-200 computer based parallel interface box. harmless enough.
However, once it's plugged in it emits the most infuriating squeak I've ever heard. It's like it's full of really tiny rape alarms or something.
While it may be a bit low spec compared to a modern scope (20MHz, 10 in dual channel mode), it's a whole 5MHz faster than my vintage farnell DTC12 (wooo...) and it's PC based therefore a storage scope (YAY!!!!)


I'm going to do a bit of poking around and see if this is normal or fixable. Or I might just wrap it in foam and operate it from a draw...

Update:
I've emailed Robert Hunt from http://teralab.org/ (first website I found that mentioned an ADC-200) and he suggested it might be a loose inductor core. I've placed my bet on one of the electrolytics drying out.
Only time (and mail-order capacitors) will tell...
In the meantime check out http://teralab.org/ for lots of experimenty goodness.
Update update:
Caps arrived, fitted etc. Apparently it wasn't the capacitors :(
It turn's out the mains adapter was to blame 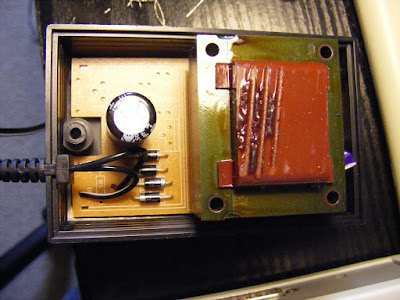 Niiice!
This antique was supplying 15v instead of the required 12v. A quick sift through the spares collection (or crap heap as my dad used to lovingly call it) and some hotglue later: *Ta-da*
One silent scope! (wasn't that an xbox game or something?)

Moral of this story: always check the power source. Especially if it's a massive, lead filled, unregulated toe-breaker.

Email ThisBlogThis!Share to TwitterShare to FacebookShare to Pinterest
Labels: oscilloscope