One of the guys I work with (who wishes to remain anonymous) brought me another mouse to fix. 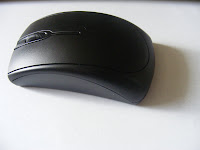 He described the symptoms to me: "It only lights up when I slam it on the desk"

I immediately suspected the poor thing had been bounced by one of my co-workers minions children. 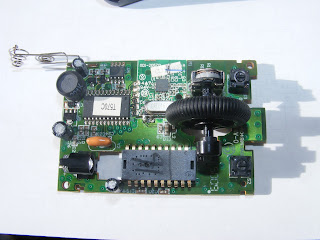 After liberating the screws I pulled the PCB out, did a quick bleep on the battery terminals and a general inspection. 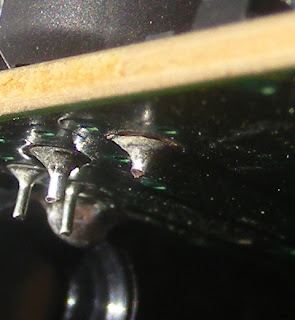 This is one of the pins of the large inductor on the left hand side in the picture above.

As you can probably see the pad has lifted. This is easiest to identify by looking at the board side on and looking for the brown fiberglass of the PCB showing.
Larger pic

If I had been thinking straight I would have scraped some of the top layer of it's connecting track away and bridged the pad onto it.


What I actually did was remove the lifted pad entirely, thus further weakening the component's mounting. 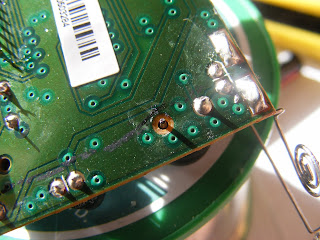 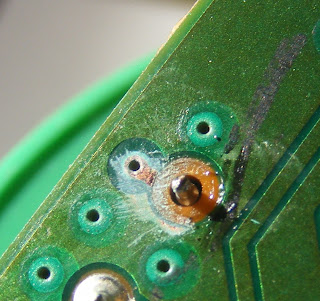 Here's the pad after I attacked the remaining track with a scalpel. 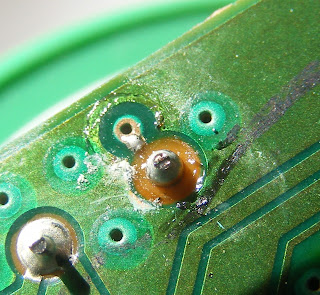 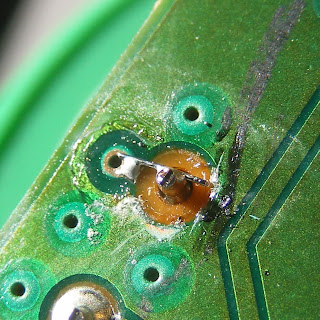 A nice strand of wire installed.
Not the best work I've ever done, but it'll do the job.

I then reassembled the rodent, applied batteries and took it for a quick (and highly functional) test drive :D
And I didn't even use any hotglue!
Posted by webby at 18:34